It was a great challenge to prepare a two day menu for the event and to take into account a variety of allergies and the dietary preferences of over 120 people. Besides the usual vegetarian or vegan diets, among our guests there were allergies to milk products, gluten, honey, all kinds of fish, some kinds of meat and even strong chemical fumes, garlic and onion. Onion and garlic?

We prepared an international conference on value conflicts and civic actors for the third time. This year, we focused on their relationship with violence. 120 participants from 15 countries spent two full days of discussions, role-playing and exhibitions. We are preparing video recordings of amazing speakers we have invited, so everyone who could not make it to the conference can watch them. Interviews with some of them have already been published in the media. However, we would like to provide you with a backstage pass. We offer you a few bits and pieces – perception from some of the insiders at the conference. Moreover, Zuzka Fialová has prepared a separate blog about one of the unforgettable personalities at our conference – Mustafa Dzhemilev. So, here are a few remarks from Lukáš Zorád and Dušan Ondrušek.

How was the conference prepared?

Many interesting moments happened during the planning and preparation of the event. For example, it was a great challenge to prepare a two day menu for the event and to take into account a variety of allergies and the dietary preferences of over 120 people. Besides the usual vegetarian or vegan diets, among our guests there were allergies to milk products, gluten, honey, all kinds of fish, some kinds of meat and even strong chemical fumes, garlic and onion. Onion and garlic? Aren´t they in every food? We put together a menu with the help of a hotel staff and thankfully there were no flare ups. Phew! An abrasion was found on the face of a social worker named Stefan from a Berliner organisation Gangway, a Berlin based organisation. When answering a question ‘What happened?’ he replied, ‘Bratislava happened’ and he did not want to reveal more. Antonina Fonari, an expert on civil society from Moldova also took away nice memories from Bratislava. She jumped at the chance to distribute the leftover food from the conference to homeless people on the streets of Bratislava. In response our colleagues Zuzka Kamenická and Anna Zemanová contacted a civic association Vagus, which helps the homeless and the hotel staff helped us pack the food and divide it into portions. Antonina was thrilled. She told us that she had experienced many conferences and events during her 20-year career, be it in Europe, in the U.S. or Russia,where she had always gone to the streets to distribute leftover food alone. This was the first time that conference hosts not only welcomed the idea, but also helped to make it happen as fast as possible despite being tired and late evening. 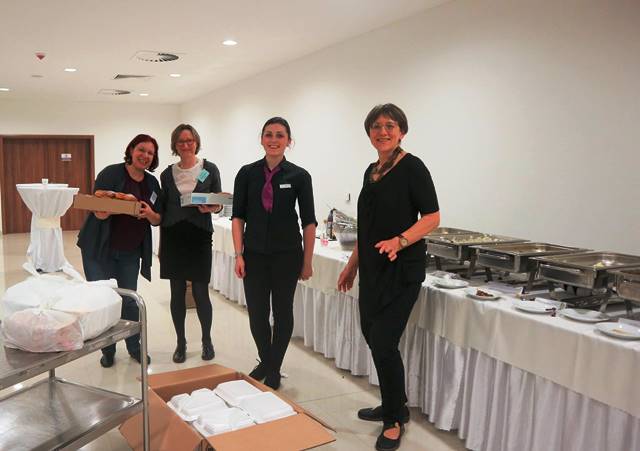 Coincidentally, three of the first five guests presenting at the conference were Muslim. Sajeda Shawa from Jordan, a UN humanitarian worker in the Middle East, with no hijab (headscarf) on and with a smile on her face, beautiful white teeth and excellent English immediately recognised Dušan Ondrušek and delivered a message from another Jordanian, Rasha. ‘Are you Dušan? Rasha is sending you a hug. Can I hug you?’ she asked jubilantly. A spontaneous proposal for a hug from a Muslim woman is rather unexpected but the world is evidently more diverse than our prejudices. I believe that we could discover the many faces of this religion from countries like Albania, Macedonia, Kosovo, Jordan or Crimea. During the event, our guests constantly proved to us that their faith is absolutely complementary to our common values. Experts on humanitarian assistance (Sajeda Shawa), deradicalization (Hanif Qadir) and even Nobel peace prize nominee (Mustafa Dzhemilev) have come to the conference. In addition Salah Mehager from Sudan, who lives in Nitra, is just a happy father, husband and entrepreneur, who joins an interfaith dialogue in an effort to increase tolerance and understanding between people. In his speech at the conference during a dialogue between representatives of Abrahamic religions (Muslim, Jew and Christian), he mentioned that the effort of our government to make the registration of Islam as a recognised religion impossible by artificially raising the required number of adherents is absurd, because his faith doesn’t need a registration to be sincere and real. (Lukáš Zorád, 12.4.)

Conflict is an epidemic

Julia Roig, the President of Partners Global network, has an advantage. Global network, which she helped to establish, has 21 members – centres – from very diverse countries. She framed her speech unconventionally. How about getting inspired by an epidemiology when solving conflicts? What can we use from epidemiological approaches (such as philosophy or practical steps) while dealing with violence and transformation of conflicts? Julia says that one of the inspirations is to divide problems analogically, just like in an epidemiology. It means to focus on:

3/ on possibilities of treatment.

She gives the program of a mayor of Barcelona, Spain - Proyecto Anti-rumoures (https://goo.gl/nfs3vj) - as an example of prevention. What destroys neighbourhood coexistence and could potentially escalate into tensions between Barcelona citizens and immigrants is spreading rumours. Misbeliefs about how Spain favours immigrants, how they steal jobs and abuse the social system. The reality is completely different but populists and malleable people don’t act on facts. A quote stands out in the Mayorś anti rumour materials from Epictetus: ‘Let’s realise our own prejudices, those ghosts which we created for a fight with delusions. This realisation will allow us to become free citizens.’ During a migration wave, Barcelona educated 350 ‘anti-rumour agents´and started to issue a comic book about tales of Catalonia-born Rosita and her Peruvian nurse Blanca. They experienced difficulties of intercultural clashes (at health facilities, shops, with police). The comic book is extremely popular among Barcelonians. Its third book edition is now being issued. 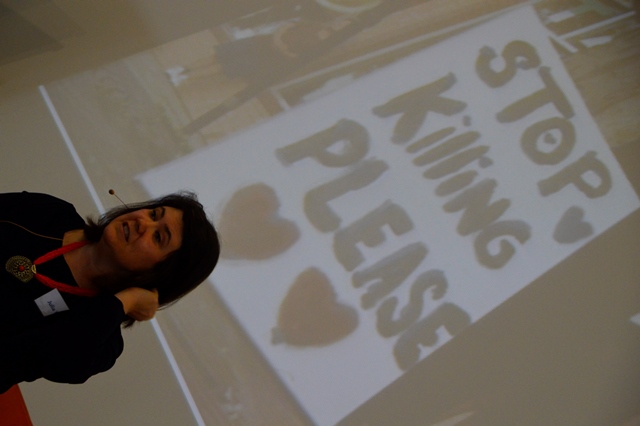 Hanif Qadir offered a powerful personal story. The Al-Qaeda recruited him as a youngster to its ranks of fighters. It only took Hanif after 7 days among the jihadist fighters to recognise what was really happening. He understood that he had made a mistake. It was enough for him to see children girded with explosives in order to undertake a martyr journey to heaven. They were told that it wouldn´t to hurt and that they would be reunited with their families in heaven where everlasting happiness awaits them. During his speech at the conference, Hanif didn’t explain more about this moment of self-repentance. I have tried to find out whether he writes more about it in his book ‘Preventing and countering extremism and terrorist recruitment‘(2016, https://goo.gl/fD81pp). Hanif describes his shock regarding the brutal attitude of Islamist terrorists towards children. They explained to Hanif that these tactics were a response to American rockets and drones. At the time this explanation made sense to him. Our children, little martyrs who are sent to a fight, can find targets more precisely than enemies’ laser-controlled missiles. Local jihadists explained to him that a presence of ‘disbelievers’ in explosives’ range was a blessing and that it gave them a unique chance to perform Jihad. ‘Allah has blessed us with this opportunity. We don’t have the option to travel to America or Europe, so he has carried disbelievers to our door.’ Most of the fighters couldn’t afford their own shoes but all of them had a machine gun hang over their shoulders. Hanif packed himself very quickly and decided to return to the UK. Sobering up was really fast. The question remains, how are jihadists and other radicals with simple mental capacity successful in fooling young people so easily. That‘s a real mystery. 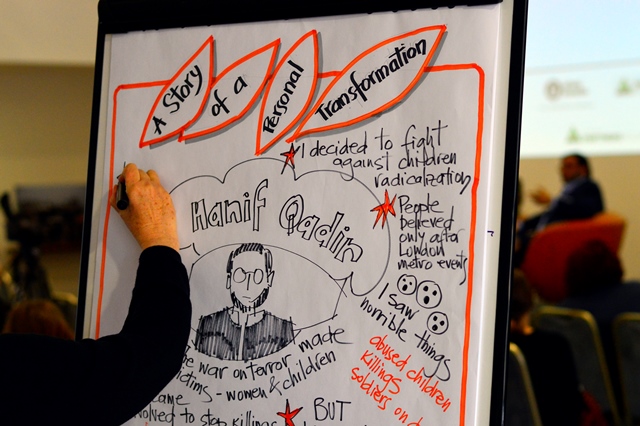 In the evening, I launched my third book of rumours named Yahoo Boys at the conference. During festive speeches, all participants made dozens of paper planes wrote messages on them and then, before the Champagne, all planes took off and a whole paper squadron covered stacks of books. Nice, touching, happy. Thank you, thank you and thank you. Messages on the little planes were worth....... Some of them were longer, e.g.: ...’We remember beautiful times which we have spent together in space between terminals 1 and 3 catching Pokémons’… Some of them philosophizing, e.g.: ‘I wish humans would see the humanity in each other“... or „Is Y generation different or perceived as different? ‘But psychodiagnostic ones were also delightful, e.g. ‘you are f*** amazing!’ 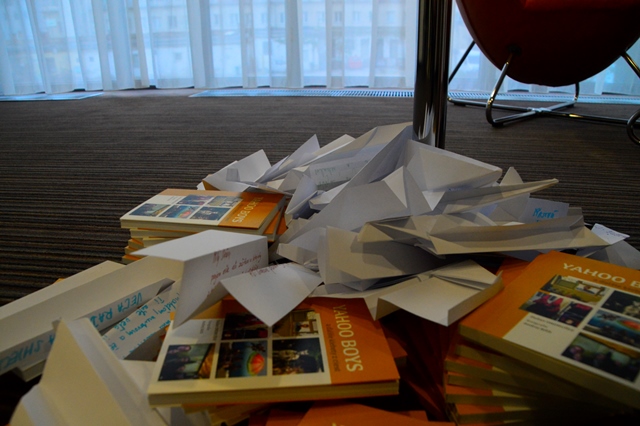