Dialogue about abortion on peace sofas

Face to Face - Faith to Faith with Adrian Cristea

Can we fight fake news with fake news?

“Fighting fake news with fake news” is the motto of the project Forbidden Facts. The idea is to create click-bait styled fake news article, share it on social media through its Facebook fanpage and see the peoples’ behaviour.

This provoking idea of creating fake news came up during TechCamp Brussels 2017. The participants wanted to find out how to reach people who like and share fake news online and how to show them that such news are not true.
“Fighting fake news with fake news” is the motto of the project Forbidden Facts. The idea is to create click-bait styled fake news article, share it on social media through its Facebook fanpage and see the peoples’ behaviour. 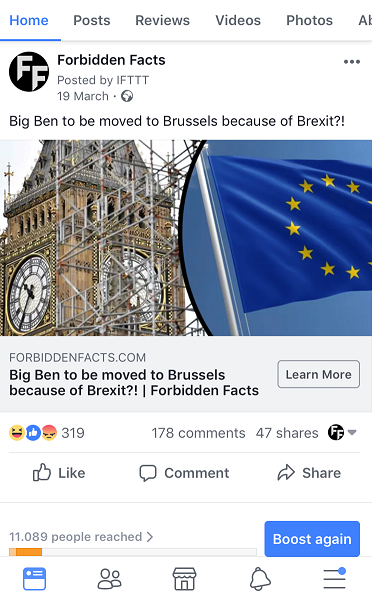 The articles on Forbidden Facts are written in the same type of language that is used in conspiracy news, so it attracts the typical conspiracy readers. What may look at first as a shocking (fake) news is revealed at the end of the article as a pure joke. The authors thus wanted to show the readers, how easy is to deceive them with fake news. They are trying to create articles about various topics, the more shocking and unbelievable, the better. The headlines are usually saying something like: “Discover Which Trump Cabinet Member Was Just ARRESTED For TREASON! Shame!“ or “Golden Gate bridge moved to Lisbon overnight!!” or “Is Valentine’s Day a communist holiday?!” The use of exclamation and question marks or capital letters cannot be missed in the headlines. What works in such articles is visually attractive content and easy language and it should be a current topic that interests many people, such as politics, sports or national matters and the debate about these topics is polarized.

The truth behind the Big Ben article 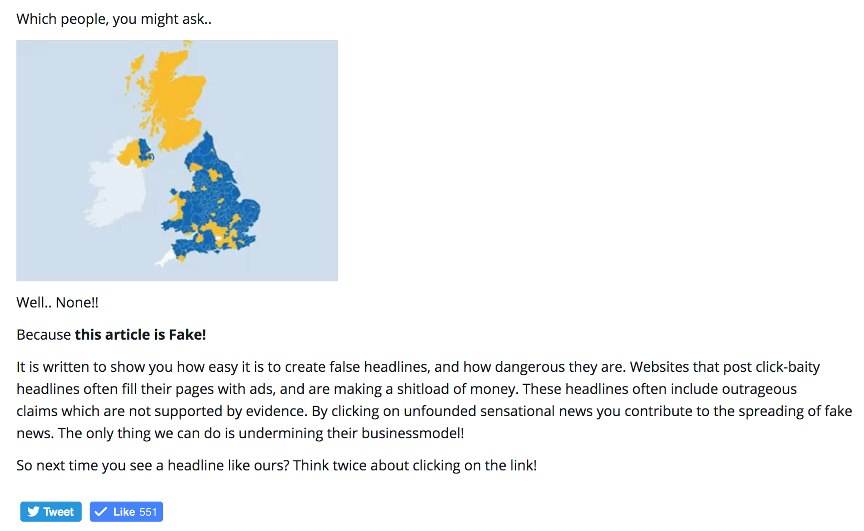 However, they do not want to be spreading fake news that could actually harm somebody, so they are avoiding using racism, real conspiracies or accusations. Most of the articles look like jokes at the first glance. But look at the numbers below. Will they shock you?

According to the analysis of their Facebook fanpage, they’ve reached so far more than 148.000 people who reacted more than 22.000 times and the engagement rate was about 20%. However, the click on the link to the website was only 4.6. %. Although this is not a representative number and more research is needed, it clearly indicates new phenomenon in the contemporary online space. People do not read the full articles. People share content that they only assume using their own imagination from the often misleading headlines. This can have major consequences. Many journalists like to use irony, satire or simply exaggerated headlines for their articles. However well intentioned, they too may be often shared without knowing and understanding the whole context and can cause confusion, which at many occasions can create unwanted hate towards innocent people. Interesting observation was that Facebook allowed the Forbidden facts team to boost all their posts. 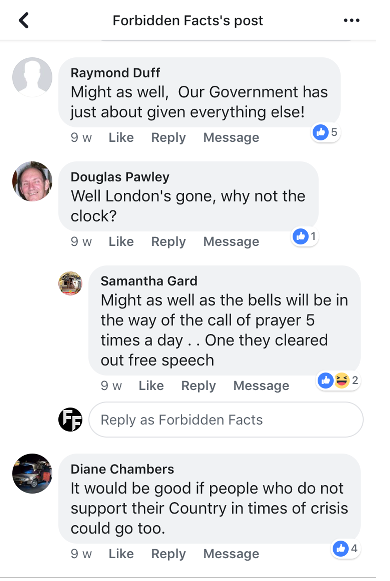 So, we may want to ask loads of questions. How to get people to read whole articles and recognise that they are fake? How to get the readers, who got the idea of this joke, to take some action and to spread it within their network?